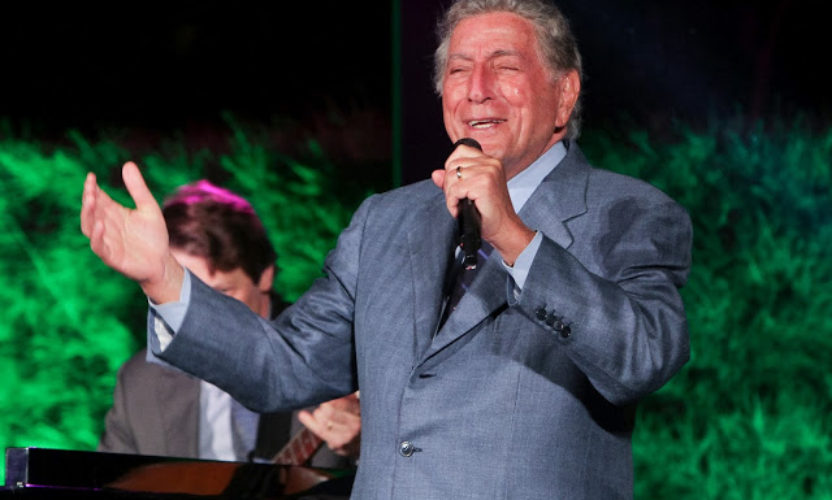 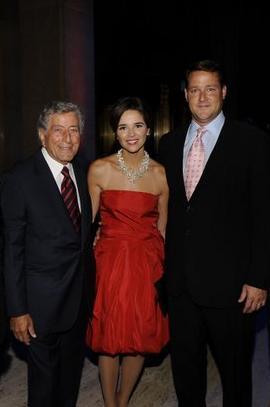 Tony Bennett’s All-Star Tennis Event and Benefit Gala brought together Grammy-Award winning artists and the top professionals in the sport of tennis to benefit three charities that help kids find and fulfill their potential through sports and the arts.

MIAMI, FL – MAY 8, 2012: Legendary performer and 17 time Grammy winner Tony Bennett honored Sean Wolfington for his philanthropy and support of at-risk children through Exploring the Arts and Team Bryan at the Vizcaya Museum and Gardens on March 19th. Wolfington, an entrepreneur who has built and sold four technology companies by the age of 40, created the Wolfington Foundation to help change kids’ lives.

Earlier in the day, the All-Star Tennis Event was held at the Cliff Drysdale Tennis Center at The Ritz-Carlton Key Biscayne, Miami, featuring amateur players, celebrities and the top tennis players of the world including Novak Djokovic (No. 1 in the ATP), Bob and Mike Bryan (No. 1 doubles team in history), Mardy Fish (No. 1 American & No. 8 in world), Caroline Wozniacki (No. 4 in the WTA), Kim Clijsters (US Open Champion), Ana Ivanovic, and Ryan Harrison. Bennett greeted the players at an exhibition match that ended the tournament with over 300 spectators in attendance. Latin superstar Alejandro Sanz also joined in the tennis action at the matches with other notable celebrities like the Felix of Luxembourg, Prince of Luxembourg, and Eduardo Verastegui (actor/producer) from the film Bella, which Wolfington financed and produced through his production company, The One Media.

Later in the evening, a seated dinner gala for 400 guests held at the Vizcaya Museum and Gardens featured a special performance by the legendary Mr. Bennett. Bennett was joined on stage by Alejando Sanz, the most Grammy-winning Spanish artist in history (18) for their duet of “Yesterday I Heard the Rain” which is featured on Bennett’s #1 CD, DUETS II. A dessert reception followed dinner and was highlighted by a performance by the Bryan Brothers Band, featuring Bob and Mike Bryan, Jim Bogios (drummer of the Counting Crows), Michael Lee Johns (vocalist and American Idol finalist), James Slater (Grammy-nominated artist and songwriter), George Holdcroft, and surprise guest Tim Mitchell, Shakira’s musical director. YouTube sensation Tiffany Alvord (160+ million views) was also invited to perform during the Afterglow party.

The All-Star Tennis Event was sponsored by The Ritz-Carlton Key Biscayne, Miami, The Cliff Drysdale Tennis Center. “It was a great event for a great cause,” said Cesar Conde, President of Univision, which was the media sponsor for both events. The evening was hosted by Univision’s Giselle Blondet, the host of the channel’s “Nuestra Belleza Latina” program. The seated dinner was catered by Thierry Catering, and the delicious desserts bar by Italian Lifestyle Catering by Puntino, owned by hotel impressionario Cristoforo Pignata. The gala was sponsored by Mayakoba Resorts, one of the most exclusive luxury destinations in the Mexican Riviera; the Automotive Leadership Roundtable, a group of the country’s top performing and most influential automotive leaders; and Mollydooker Wines, one of the world’s most decorated winemakers and makers of Velvet Glove (99-point award winning wine) and The Boxer, the #1 rated Shiraz by Consumer Reports.

Tony Bennett’s All-Star Tennis Event and Benefit Gala brought together Grammy-Award winning artists and the top professionals in the sport of tennis for two events to benefit three charities that help kids find and fulfill their potential through sports and the arts; Exploring the Arts, founded by Tony Bennett and wife Susan Benedetto to strengthen the role of the arts in public high school education; Team Bryan, founded by the Bryan Brothers and Ryan Wolfington to help get children off the streets, into the classroom and onto the tennis court; and the Greater Miami Tennis and Education Foundation. The sold out event raised nearly half a million dollars and may become an annual staple in Miami for tennis and music lovers who will continue to make a difference while enjoying a world class tennis event and dinner concert in two of South Florida’s nicest venues. Bennett, who has been called Tony Benefit due to the amount of benefit concerts he has performed in his active 85 years, said “of all the benefits I have attended, this is the best one ever.”

Due to the event’s success, the event producers are exploring the option to make this an annual event- to request an invitation, please fill out a contact form at http://tonybennettevent.com/contact.html.