Inspiration from Jewel, The Inspiring Children Foundation and Cherrial Odell

Last year I had the great honor of being involved in the Necker Cup, a celebrity Pro-am tennis tournament hosted by Sir Richard Branson and Premier Tennis, designed to raise money and awareness to help underprivileged youth find and fulfill their mission in life. One of the worthy charities supported by the tournament is Marty Hennessy’s Inspiring Children Foundation, co-founded by my twin brother Ryan Wolfington. Over the course of the tournament there were many exciting events, but this one evening in particular will stay with me for many years to come.

During a performance by my close friend Jewel, an amazing young woman named Cherrial ODell was brought on stage to share her story of perseverance.  Just one year before this trip to Necker Island,  Cherrial was struggling with feelings of hopelessness and despair, brought on by a difficult upbringing.  After finding inspiration in Jewels song “Hands”, Cherrial began participating in the programs offered by Marty Hennessey’s Inspiring Children Foundation. One year later, she got to meet Jewel on Necker Island and share her story with the person who inspired it.  It was beautiful to see the glow as she was able to share her story with Jewel, and even more beautiful to see Jewel’s glow in response. Spontaneous moments like these inspire, and hearing what Cherrial had to say both on stage that night, and to Jewel directly brought me great joy. 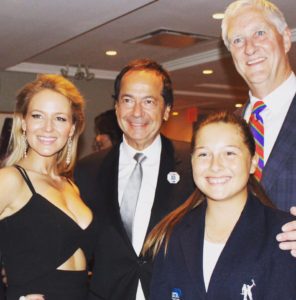 Jewel, John Paulson, Gordon Smith and Cherrial ODell at the US Open

Since meeting Jewel on Necker Island, Cherrial continues to make huge strides. Recently, she was invited to attend the US Open and was seen taking pictures alongside Jewel, John Paulson, and Gordon Smith.

“The Foundation has helped me find my self-worth and begin my journey, and I’m so thankful for everything that they have done for me” – Cherrial ODell

Check out the video above to hear Cherrial’s brief but moving story during Jewels live performance.  If you are interested in supporting the Marty Hennessey Inspiring Children Foundation,  please visit inspiringchildren.net.  For more on my visit to Necker Island and The Necker Cup (including photos) click here.